The Palazzo delle Esposizioni of Rome triplicates: starting from Italy, arrives in France and Russia through three exhibitions about the so-called short century. Starting from a technological least common denominator – the idea of new, in the art, starts from the French Impressionism to reach then the futurist theory and the developing of technology in transportation – the ‘900s art history intertwines art, design and technology in different ways and representations, although similar in some ways.

RUSSIA ON THE ROAD. 1920 – 1990 Painting and graphics from collections of the Russian Realist Art Institute, Russian State museums and from private collections.

Russia on the Road overviews almost a century of Russian art history, mainly coinciding with the soviet experience: a period where they tried to turn utopias into reality and reality into myth. Through a thematic approach, the exhibition tells the sudden protagonist role of the new means of transport in the Russian environment.

Hundred-fifty years ago, the idea to be able to cover the surface of our country with a motorway network would have seemed like utopia. Today, on the contrary, anybody who lives in a civilized Country finds inconceivable the idea of being able to live without catching trains, planes, cars or tubes: the world without trasportation would be perceived like a dystopia.

Last hundred-fifty years have been a period in humankind’s history where we assisted to the realization of dreams, technological inventions (just think about the cinema: technology and imagination in only one means), myths taking shape, manias, phobias, new life styles and artistic trends.

Lines of transport have quickly filled up the art and life spaces, becoming symbols of the progress and of an unprecedented man supremacy on the Russian continent enormous vastness, invading also the artists imaginary, becoming noble subjects as much as the human figure or natural scenario, between ideology and individual gaze.

Railway, for instance, is not only symbol of progress, but also an allegory of human life in the work Poems of Majakovskij (1955) by Aleksandr Dejneka, that represents social life of that time and takes the name after the discussion topic of the portrayed young students: one of them holds a book of Majakovskij’s poems, a poet often honored in Dejneka’s works.

In the work Metro, Aleksandr Labas gives back an active and emotional vision about means of transport, within a series of works realized from 20’s to half 30’s, period that coincides with the making of the first tube line in Moscow.

Viktor Kudel’kin puts at the center of his work the different working class jobs and portrays workers of the cars and lorries factory Kamaz in their industry context, representing at the same time individual and collectivity: the driver Mar’jam Vasil’kova is portrayed while driving the weight lifter and the self-confidence of her moves shows how women can do a job considered before typical for men only.

Next to famous masterpieces of Aleksandr Dejneka, Jury Pimenov, Aleksandr Samokhvalov, Georgi Nisskij, corresponding to the most famous period of the Soviet art (from 20’s to 50’s), it’s possible to find surprising works from the 60’s to 90’s, that show correspondences with European contemporary cultural trends, like the Italian Neorealism or the French Nouvelle Vague. This painting, left hided for long behind the iron curtain, allows to think about a new vision of the Russian art history. 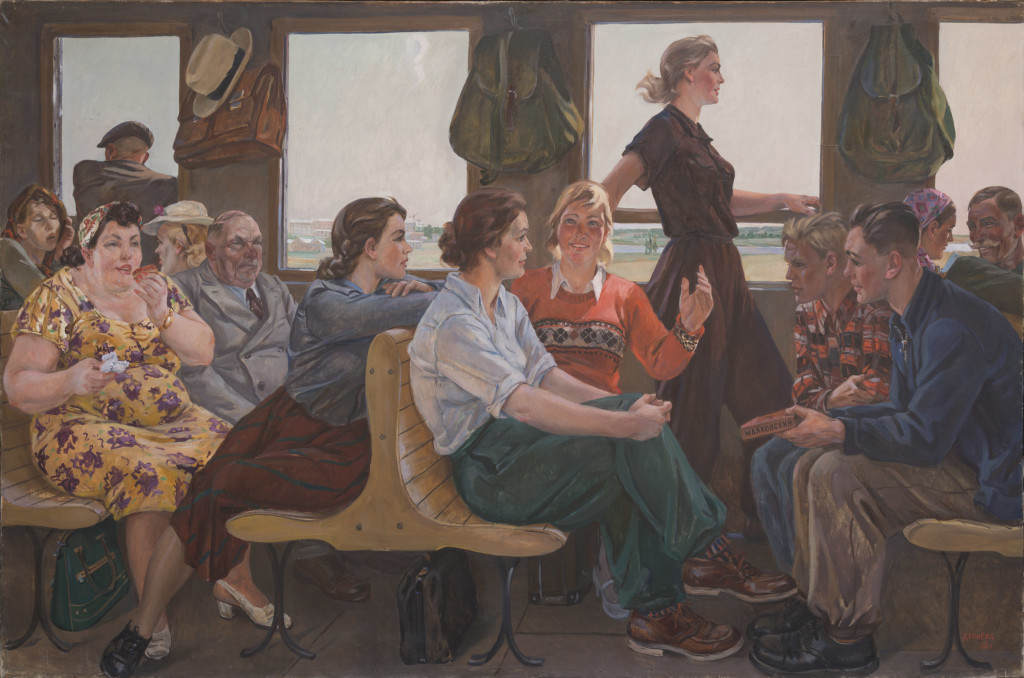 In Italy, at the beginning of the twentieth century, ornamental arts, successors of an important artistic and handcraft tradition, become exponents of a new Nation progress desire. Ebony carpenters, potters and master glaziers often work in cooperation with the major artists of the time, defining an Italian style destined to influence the origin itself of modern design. The exhibition goes on through a chronological path made of more than hundred works and based on a continuing dialogue between ornamental, plastic and visual arts.

The twentieth century beginning is characterized by the Art Nouveau assertion which is known in Italy as Liberty style or floral. Since the Esposizione Internazionale delle Arti Decorative of Turin in 1902, the Liberty style gets a particular originality in artists’ works like Carlo Bugatti, Galileo Chini, Eugenio Quarti, Ernesto Basile, Carlo Zen and becomes the dominant style of a new middle class. The Futurism strongly anti-past attitude will oppose to it, a movement that will extend to ornamental arts only after the First World War, during the so called Second Futurism.

In 1915, Giacomo Balla and Fortunato Depero writes a manifesto called Futurist reconstruction of universe, where is announced the intent to extend the futurist aesthetic to all life and art aspects.

These two artists will project and realize many ornamental art and everyday usage objects, from furniture to clothes, from tapestries to toys.

During the years of Return to order – that follow the season of Avant-gardes – recovery of classical culture assumes in Italy several declinations. Among the most interesting versions we recall the Metaphysics of De Chirico and Savinio, the Magical Realism of Felice Casorati. An enchanted vision, suspended between classical inspiration and deco taste, distinguishes Gio Ponti’s pottery and Carlo Scarpa’s first glass creations. About furniture and architectural production, return to classicism is present in Giovanni Muzio and Piero Portaluppi’s monumental style. 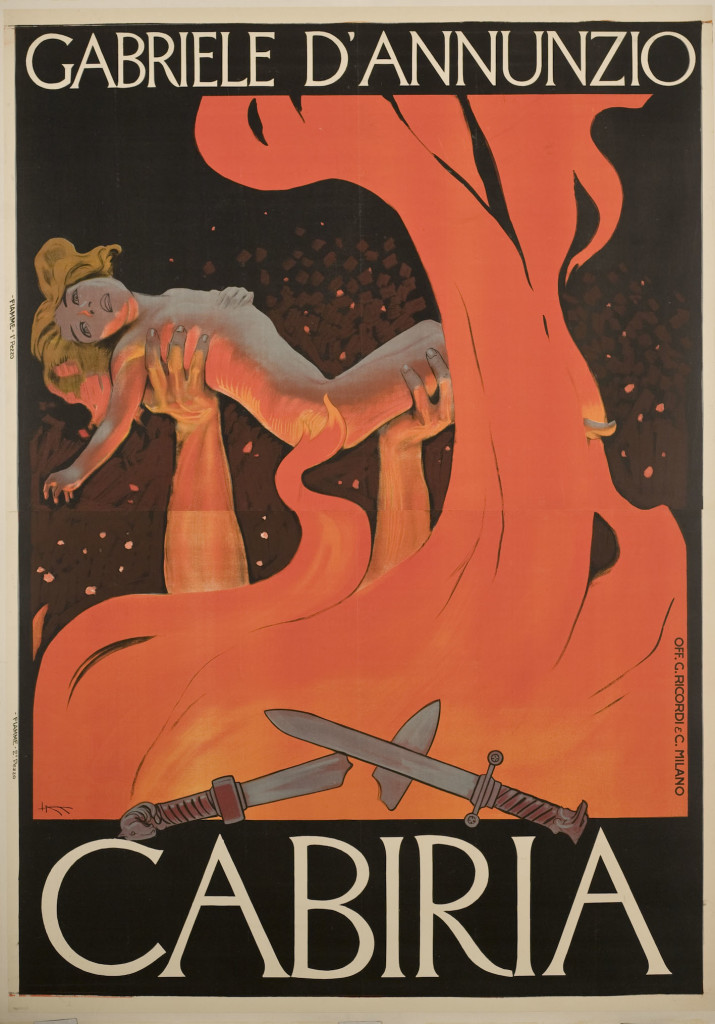 IMPRESSIONISTS AND MODERNS. MASTERPIECES FROM PHILLIPS COLLECTION OF WASHINGTON

The Phillips Collection, first museum of modern art on the USA ground, was created around the end of the ‘10s by Duncan Phillips, who decided to turn the family collection into a public museum, first in the United States to concentrate on the contemporaries’ work. The Phillips Modern Gallery (now Phillips Collection) opened to the public in 1921 in Washington: it’s basically an institution that differs from the others born in between the wars as its founder, interested to the relationship between the past and the present art, decided to support young artists and he bought the artworks only for their intrinsic value, without following the trend or the authors’ fame. In 1954, Phillips wrote: «Centuries and nationalities are mixed in our Gallery so that old and modern paintings can be brought together to be relevant and significant in some new context, some new contrast or analogy». 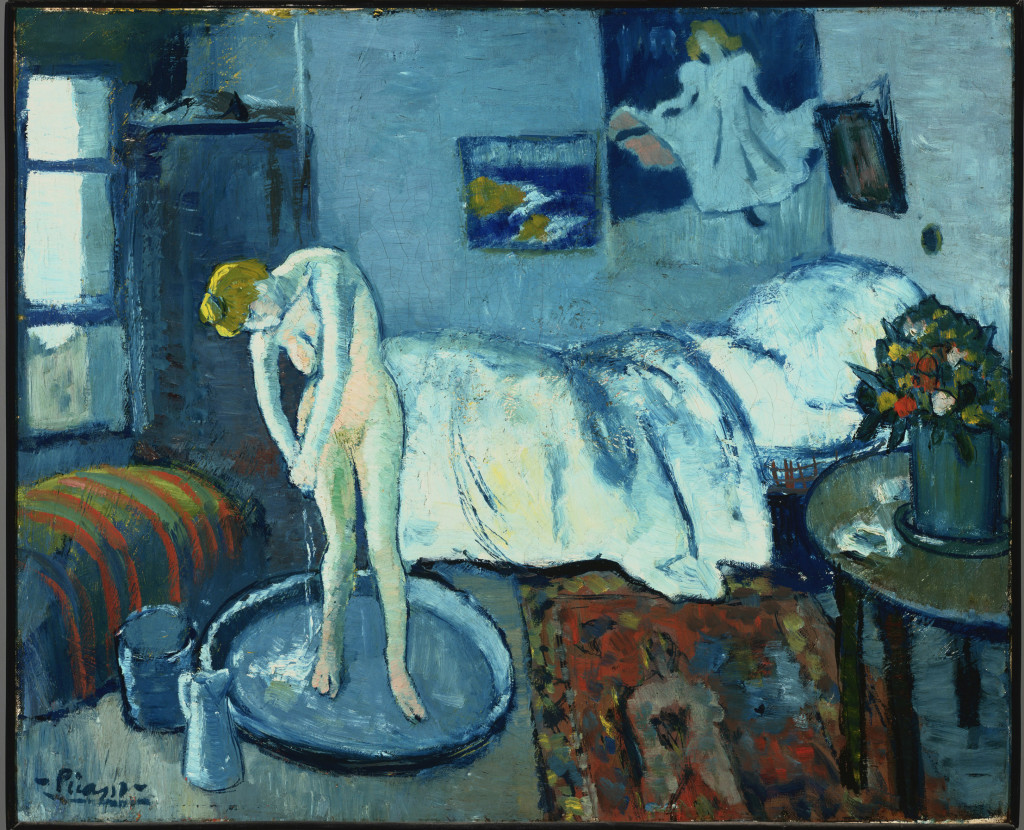 The exhibition (counts sixty-two paintings of more than fifty artists) reunites the artworks of the greatest modern masters and shows «that art is a universal language», destined to be shared and appreciated from the audience all over the world. It’s chronologically organized, by reflecting in a macro-sections form the big cultural trends which crossed the 19th and 20th century up to the World War II: Classicism, Realism and Romanticism; Impressionism and Postimpressionism; Paris and the Cubism; Intimism and Modernism, Expressionism and Nature; Abstract Expressionism. It begins with the great artists‘works who revolutionized European painting at the beginning of the 19th century, from Goya to Ingres, Delacroix to Courbet and Manet, combined with the artworks of the French Impressionism masters like Cezanne, Monet and Sisley. A prominent place is reserved to the modern masters who molded the artistic vision of the 1900s, including Bonnard (Phillips favorite artist), Braque, Gries, Kandinskij, Kokoschka, Matisse, Modigliani, Picasso, Soutine and Vuillard, next to the American Arthur Dove and Georgia O’Keeffe, till reaching the fundamental works of great American and European artists like De Staël, Diebenkorn, Gottlieb, Guston and Rothko.