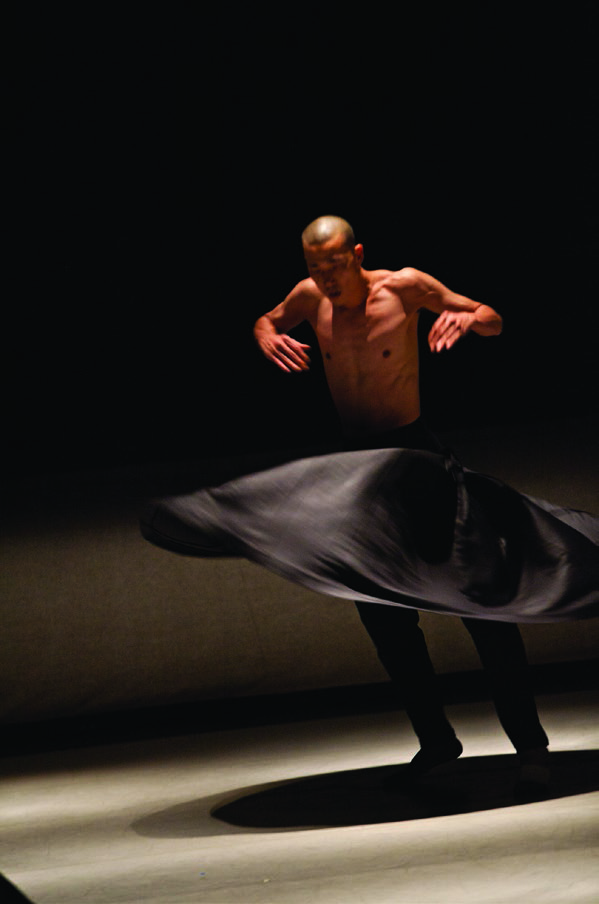 Akram Khan’s Kaash, originally produced in 2002 and reprised by the choreographer-dancer English after about twelve years since its debut, is back on stage at the Romaeuropa festival (the role played by Khan is entrusted to Italian dancer Nicholas Monaco).

Native of Bengal, but born and raised in Britain, Akram Khan blends in his work contemporary dance and classical Indian dance kathak, whose elements are scattered and recognizable in the whole performance (fast foot movements, the mudras[2] and a soundtrack filled with bols[3]).

Just as in the kathak, the choreography is divided into sections where I can recognize the different connotations that characterize the god Shiva.

Shiva, as any other in the Hindu pantheon, has a complex allegorical meaning.

He is the ascetic and yet sensual dancer. The father who does not hesitate to chop his own son’s head off, but also the one who sacrifices himself to save mankind.

He is the creator as well as the eraser.

While he dances, he makes the whole universes disappear in order to absorb and give them a new birth: “to their will is the Shiva universe on their screens.” [4]

The screen is the rectangular black hole on the backdrop created by the sculptor Anish Kapoor.

It is almost a suffocating presence; a window on the infinite which, during the performance, is surrounded by red, blue and purple lights.

From what I have learned at school, the black hole is usually defined as a massive star in the last phase of its evolution, in which the star collapses, creating a volume of space-time with a gravitational field so intense that its escape velocity equals or exceeds that of light.

A black hole swallows everything, without returning anything but: mass, charge, and rotation. However, Stephen Hawking[5] has suggested that whatever is sucked into a black hole would remain trapped in the so-called event horizon (i.e. the area around the black hole), then resurfaces in a universe through some protons that would escape the black hole thanks to quantum fluctuations (the so-called Hawking radiation).

Kaash, which in hindu language means if, if only, could be for some viewers a disorienting experience, a flowing energy where -as I guess could occur inside a black hole- quite intense moments and meditative instants chase each other and blend perfectly, but leaves to the viewer a huge freedom of interpretation.

An event horizon from which I would have never left.

In one word: magnificent.

[2] The term mudra, “seals” indicates a particular finger gestures. In the traditional Indian dance, they help the story through a symbolic coding, representing certain aspects of the character or situation the dance aims to illustrate

[3] The bols are rhythmic syllables that mimic the sound of the tabla. They remind the dancer the movements and are an integral part of the performance as they are usually recited by those who run the musical accompaniment. These compositions emphasize the ability of the dancer and are performed in a crescendo punctuated by the foot beat that increases with the speed of the same dancer

[4]   Please, see the Indian philosopher Kṣemarāja. Particularly: Vasugupta, The aphorisms of Shiva, with commentary by Kṣemarāja, edited and translated by Raffaele Torella, Mimesis, 1999.

[5] Please see his conference at KTH Royal Institute of Technology in Stockholm, August 2015