It’s June 6th 2013 when the Datagate case explodes in USA: through the investigative report made by Glenn Greenwald (journalist of The Guardian) several details about the National Security Agency mass surveillance actions have been revealed. These actions belong to a monumental surveillance program organized by the Five Eyes: the five powerful secret agencies of Australia, Canada, New Zealand, USA and United Kingdom. Millions of users worldwide are continuously supervised through Prism, Tempora, Boundless Informant, XKeyscore, Dropmine, Turbine (softwares e botnets pre-installed in servers and devices before they are available for customers) that penetrate in social networks, games and other kind of platforms. The author of these rivelations is Edward Snowden, former CIA’s technician and cooperator of the Booz Allen Hamilton (company of information technology, NSA consultant) till June 10th 2013.

It’s May 10th 2012 when the USA’s television broadcasts the 22th episode of Person Of Interest‘s first season[1], titled No Good Deed: Henry Peck is a 33 years old financial analyst; his company is a SCIF (Sensitive Compartmented Information Facility), a government tool used to protect secret data. When Henry finds out his agency is carrying on a huge illegal surveillance, he organizes a meeting with some journalists but a governmental team of hired assassins try to silence him.

One year before Greenwald journalistic revelations, Person of interest pointed out one of the biggest fears in the postmodern world (the lost of privacy, a 1984 world, already described by Orwell); the series also anticipated the figure of the main character, giving the storytelling of the Snowden chapter to the director Laura Poitras. Maybe it’s not exact to say that she chose to focus on it: Snowden chose her, contacting her through coded messages under the name of Citizenfour, because he recognized her as a person well informed on current events. In 2006, Laura Poitras directed My country my country about Iraq war; in 2010 she directed The Oath, a documentary about Guantanamo and Al Qaeda stories. CITIZENFOUR comes to close Poitras’ trilogy about the post 9/11 United States of America.

CITIZENFOUR, winner of the prize as Best Documentary at the Oscar 2015, distributed in Italy by I Wonder Pictures and Unipol Biografilm Collection, is not just a biographic documentary. That’s something so contemporary – and then in a continuous becoming – that we have to rethink it: probably it’s more like a political thriller in three acts, with an Hitchcock taste added to spy-story sequences, turning into a cinéma vérité.

In the first act, we see a stranger contacting Laura Poitras with the premise (and the promise) to tell her information with a global impact. The second act opens with the image of a black tunnel and flashing lights accelerated by the videocamera (which seems to trace a Lynchan disquietude) and goes on – chronologically – with the 8 days spent in the hotel Mira in Hong Kong (China, June 2013) where Laura Poitras and the journalists Glenn Greenwald and Ewen McAskill interview Snowden. At first, the bespectactled computer scientist has an enervating attitude of over-control, due to the oppressive condition he is forced in: his life is now completely changed and he seems to accept it in a seraphic way, he seems so calm when he says he knows he won’t be able to come back to USA, to see his girlfriend again or to contact his family. As days go by, the anxiety grows: the hotel reception receives phone calls from medias; during the interview, the fire alarm suddenly activates, alarming everyone and the room becomes more and more claustrophobic. The hotel room is the movie beating heart: the spectator feels to be in front of a countless amount of reality shows’ video cameras, in the same situation of Norman Bates when he observes his victim through the keyhole (scopophilia); it’s like the spectator is spying a private meeting with a huge political value, knowing not to be seen but feeling guilty in some way.

The third and last act shows the chaotic logical follow-on of the events about Snowden (forced to leave the hotel) and Greenwald, who has to face the effects of his report publishing, although the documentary owns a dramatic mood in the ending, when Snowden and Greenwald give messages to each other through small piece of paper, in another hotel room, this time in Moscow.

So, that’s how these three acts come to totally overturn the classic documentary rules: Snowden is not the passive object of the movie research, he is the creator, the director[2], he decides how, when and to whom reveal the information he owns, almost leading a manhunt which is against himself.

The image of the puppet master merges into the figure of a teenage super-hero with his magic cloak when he types the password on his computer – a scene that seems to hold the moral of the whole sequence of events: “don’t give up the idea that our words can be secret” (The New York), even if we are supervised by the Person of Interest’s Machine. Everybody.

[1] Creators of the serial said they’ve been inspired by Shane Harry’s book The Watchers which talks about the surveillance program led by NSA, the story is about John Poindexter chief of the Total Information Awareness program which figured out a system so close to the Person of Interest‘s Machine, where the identity of supervised people is reduced at code numbers. Jonathan Nolan (the series creator, produced by J.J. Abrams) considers this kind of surveillance system ad an existential condition from which he believes we won’t be able to come out. 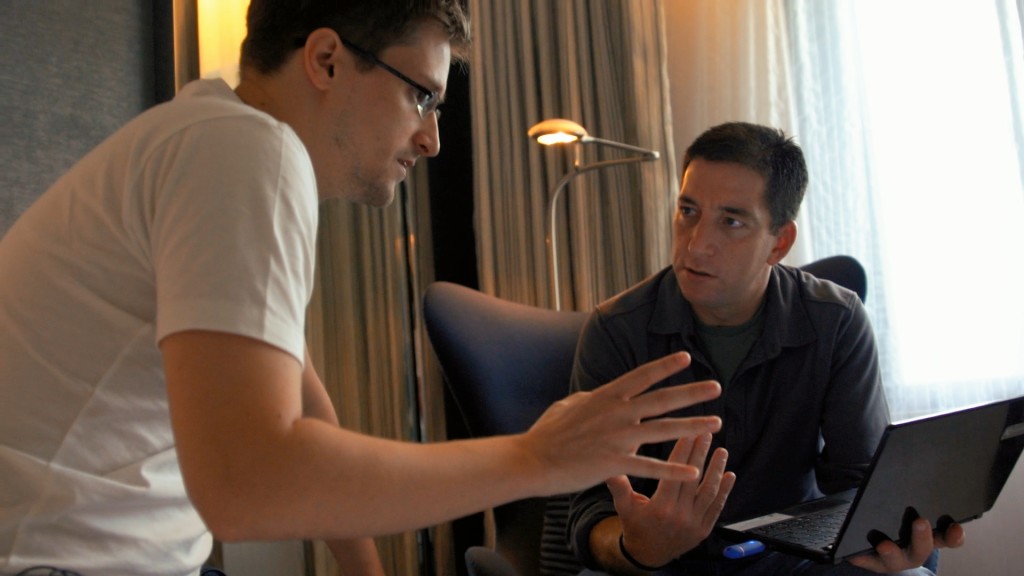