Among the celebration for the Eighty Anniversary of the town of Pontinia, the MAP Museo Agro Pontino presented the artistic duet Bianco-Valente’s installation site-specific Nuovi Arrivi, Nuove Storie, curated by Marianna Frattarelli.

Nuovi arrivi, nuove storie is the result of the artistic Residence in the town of Pontinia occurred last July and is composed of 26 colored flags fixed on the buildings of Piazza Indipendenza.
We report, as follows, the released interview. 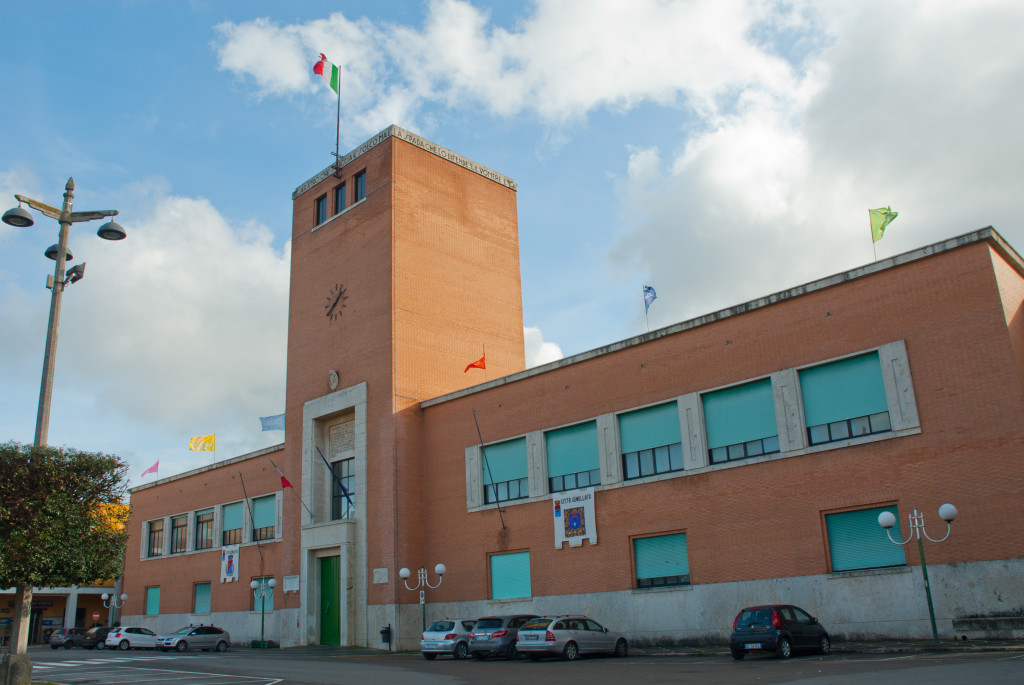 The artistic research you’re carrying on is based on a close link with the territories you interact with and on a strong anthropic approach; would you tell us your experience in a town like Pontinia?

The interest for these territories was born previously to our arrival in Pontinia last summer, when we had read one of Antonio Pennacchi’s famous book; with time interest has developed in more levels.
The linguistic phenomenon has been the first aspect to impress us and from which our research is born: after the affluence of colonists coming from different regions – Veneto and Ferrara areas first, later also from Calabria and Sicily – a new language has come out as a result of this mix. Interesting is also to see how food traditions, linked to particular celebrations, varies according to origins.
In first place we asked to meet the elderly people who could remember the arrival in Pontinia. The first colonists had been given farmhouses, we could talk to their children, some of them hardly remembered the travel or life conditions in the place of origin. We gathered records about life in the farmhouse, on the sort of activities started in town; for instance there was a storage bikes, very common at the time, made for people who used to travel by bike to go to work. During our visits to Pontinia we had also the chance to meet and talk to the members of the Indian community, settled in town since about fifteen years.

Nuovi arrivi, nuove storie confirms the huge attention you reserve to architecture in your research. What’s your relationship with the architectural dimension of Pontinia?

We do appreciate the rarity and charm of cities like Pontinia, Latina and Sabaudia: places conceived from zero, starting from a well-defined project; besides the rationalist architecture that characterizes Pontinia is a basic aspect. Nuovi arrivi, nuove storie owes a lot to the architectural awesomeness. We wanted to give back to the city community the acquired stories setting them, through the flags, on the buildings surrounding the municipal tower. We got impressed by the symbolic majesty of this tower from which the Italian flag stands out and where there’s an inscription that intimates to defend territory and work the land; a symbol of politic power from the Fascist period. The installation is set on the buildings of the main square; the square is the dimension where the community live, meet and work. If from one side the inscription certifies an institutional history, from the other side there’s the embrace of the surrounding buildings, whose flags tell a micro-story, that borns as private and becomes public, universal. A poetic feature could be that the sentences written on the flags only can be legible thanks to the wind, as to spread out their sense just like sounds and smells. 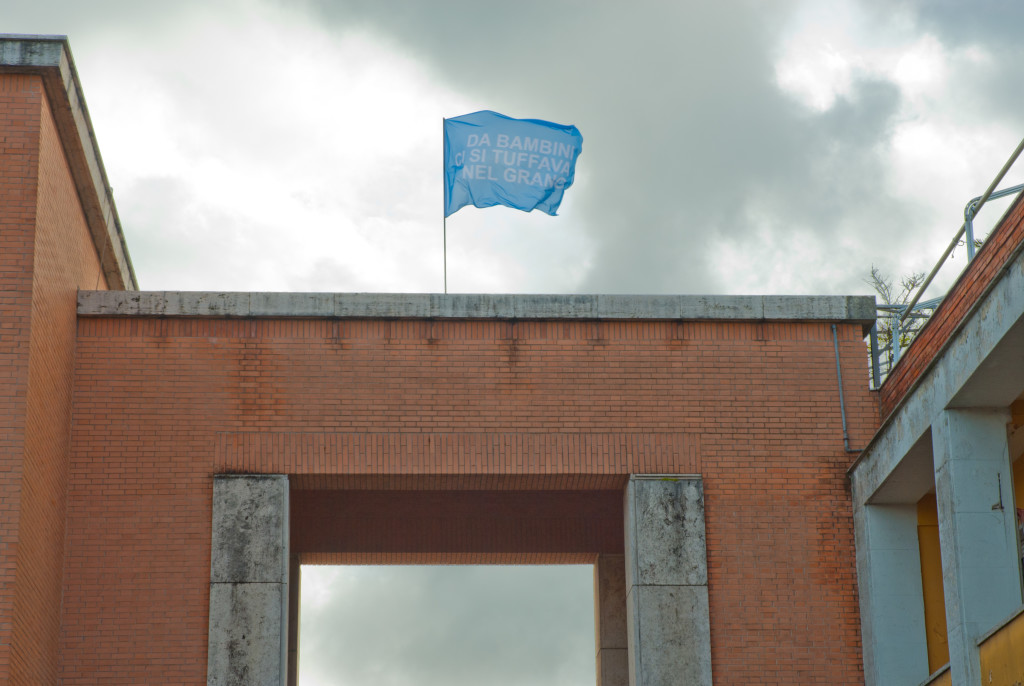 Your site-specific artwork has particular importance in the contemporary history, tragically marked from immigration phenomenon; about this topic have you found enough integration between the Indian community and local citizens?

These new settlers, when arrived, provided the shortage of manpower in working the land, doing the work done from the first colonists of these territories. Now, besides who works on the land, some of them have started commercial business with several sort of shops. Although integration is done, there’s still who wishes to go back to the homeland; we find interesting that a lot the new Indian settlers are building their future in this town, becoming effectively citizens of Pontinia. Talking to the Indian community we noticed a clear difference between the first Indians arrived, who had a hard impact, compared to the second generations that are now in condition to settle down definitively.

Interesting is the contamination of elements and individualities that could seem different and distant, but are very similar in some ways. During the making of the project, which was the choice criterion to select the sentences of people interviewed? Did you spot similarities among their stories?

Conversations last long and in all of them there were recurring elements: atmosphere, landscape, extreme poverty. We’ve chosen symbolic phrases like “Mended shoes”, “Mended clothes passed on to others”, “Walk on bare feet so not to wear out the shoes” as poetical emblems of a common life.
We got impressed from the sentence: “A pen as a present not to work on the land”, from the story of an Indian little girl who, arrived at the airport, was given a pen from her father as symbol of redemption. Between the old and new settlers recurred common phrases like: “It wasn’t all we’ve been promised”, “When will come the after?”. 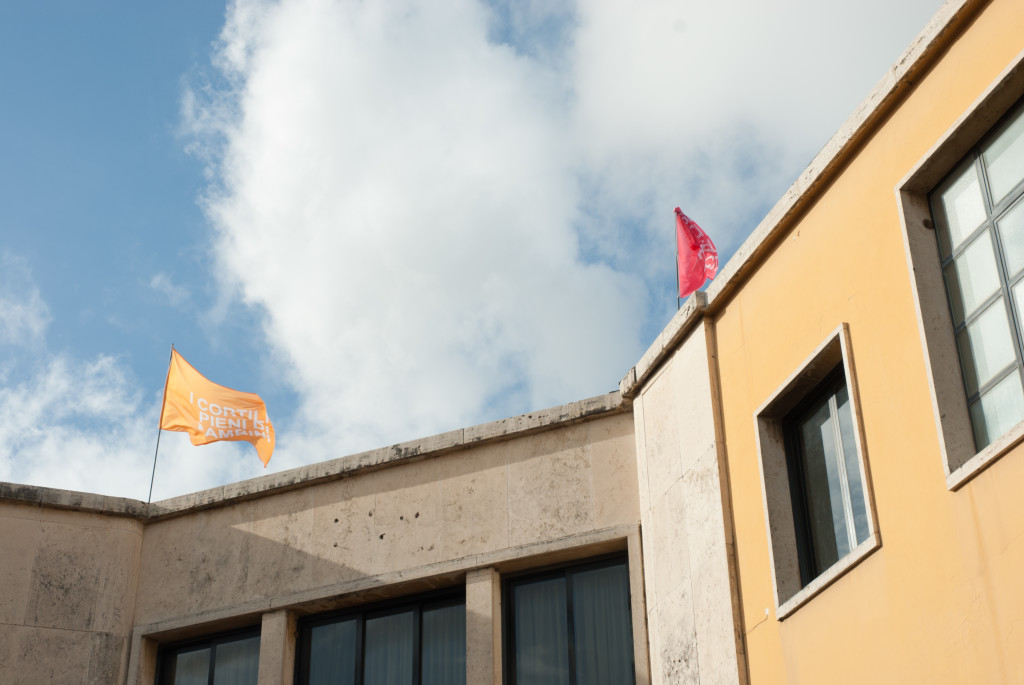