Talking about Blue is like handling the most fragile crystal. Theoretically, one could describe its surface as blue and monochrome, but nobody would be able to guess what is inside, and, of course, nobody would dare to destroy it just for the sake of curiosity. The only way to proceed is making theories.

Blue is the most recent movie by Derek Jarman, director of the intricate Wittgenstein (1993) and the captivating Caravaggio (1986). It shows for 79 minutes a single blue frame, associated with noises taken from everyday life, sounds, songs, poems. Nevertheless, it would be simplistic defining THE colour as a common blue, the first shade that comes to your sight or to your mind. THE blue he considers is the International Klein Blue, by Yves Klein.
Jarman was always fascinated by this artist. He thought about making a movie about the colour symbolizing Klein already when his career was at its peak. Unfortunately, no filmmaker was ever interested in his project, and it was put aside for a long time.
It was Jarman’s wearing illness, AIDS, in the first 90’s, to motivate him to make this audiovisual (a term that would probably sound more appropriate than “film”)that would pay homage to the artist and his ultramarine blue, mixing it with the tale of his own life. The first person narrator is there, with his drugs to swallow and the frequent medical examinations, which point out his uncertain condition, not because of the impending death, but because of his position as an ill person in our society. 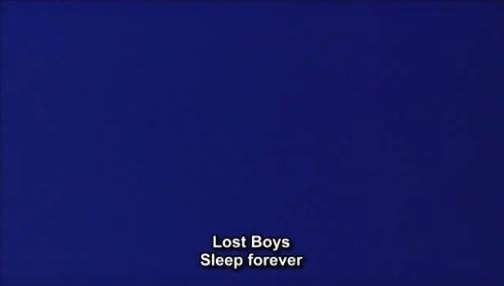 The link between illness and colour is not intuitive. Jarman was coping with a serious sight loss, caused by a progressive retina deterioration. Therefore, choosing a monochrome screen was almost a necessity, besides being an homage. Nevertheless, the director did not mean to turn a movie script into a product used to find compassion or pity.

The International Klein Blue was exactly what he could not see and what he could see every day. Staring at the blue frame for 79 minutes proves to be almost soporific. Jarman said that: «HIV is not tragic, is boring»1.
The majority of people would agree with the fact that the International Klein Blue is nothing reassuring in this movie context. Jarman saw in the blue colour a way out to be free; the viewer has a general feeling of seeing a simulation of the director’s life from an inside point of view, even if there is a stabilizing sensation in some moments. It feels like seeing the same things he sees, perceiving the screen as a blue curtain that never opens and gives an immediate revelation, revealing nothing at the same time. 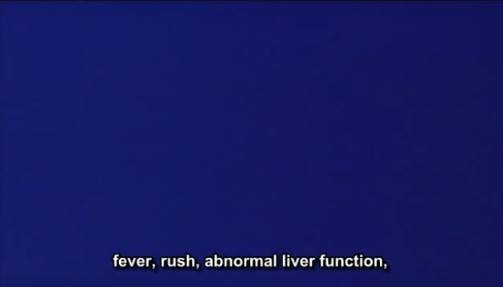 The sounds of a quiet life accompany the movie non-viewing as a support wall standing behind one of Klein’s paintings. They are not the main features, even though the viewer sight does not get involved in its totality and monologues and sound should stand out. Often monologues emerge as a stream of words dictated by feeling blue, by the anguish, by the sense of emptiness that shows up also – and especially – in the repetition of friends’ names now dead, that ends up in a bitter resignation.
The main character is the blue, not the people who appear one after the other during the movie only to sing monotone tunes or declaim verses, even beautiful ones. Colour is the image, the sensation; it is life, torment, boredom. It is what comes right before the black, which for Jarman would have followed very soon after the movie coming out.

«You say to the boy open your eyes
When he opens his eyes and sees the light
You make him cry out. Saying
O Blue come forth
O Blue arise
O Blue ascend
O Blue come in».