To tell about the International Book Fair of Turin is almost like trying to summarize a wonderful novel of hundreds of pages, imagine to give back the beauty of Anna Karenina, of Edmond Dantès stories and the Musketeers adventures.

As it’s about 5 days full of events that frantically follow one another; books presentations and meetings about books that will go to pile up in our ideal bookshop, making even more confusion in our readers consciousness, uncertain about which book to choose first or what comes first.

Let’s start from the numbers: the sold tickets have been 127.596, with an increase of the 4.05% compare to the previous year 122.638 tickets. This thanks to one of this edition innovations, that is the reduced price ticket (5 euros) for the evening, from 18.00 hour, thought especially for the young who have been the real protagonists: more than 25 thousand, they have played a part in making this 2016 Fair the “young’s Fair“, on this focused the same organization that has dedicated several initiatives to them. For instance, Adopt a writer (20 authors met the Piemonte Region students, by visiting the classes of the whole Region) or Visioni Dahl basso: 100 di questi Dahl, homage to the great visionary “scarechildren” for the 100 years since his birth. An extraordinary writer, who’s beside author of Matilde and The chocolate factory (that’s had two film adaptations, the last one by Tim Burton – and who took part at Cannes Festival last edition with The Big Friendly Giant of Spielberg), which has opened the Fair on the 12th of May with a literary party full of reading, games and obviously chocolate. Starting from Dahl’s ideas – or visions -, they’ve talked about migrations, terrorism explained to the children, the importance of memories in building the future and the problem of cyberbullying. Being himself a visionary, the writer gets fully in the big subject chosen for this edition, VISIONS: they wanted to make protagonist who is able to look at the future, through the actuation of projects based on the valorization of artistic, literary and philosophic heritage, making that necessary link between humanistic and scientific sphere. Excellent examples of visionaries are Roberto Cingolani, director of the IIT of Genova who took part together with the android robot iCub, and Giulio Tonelli, responsible for the Cern experiment that’s allowed to discover the Higgs boson. 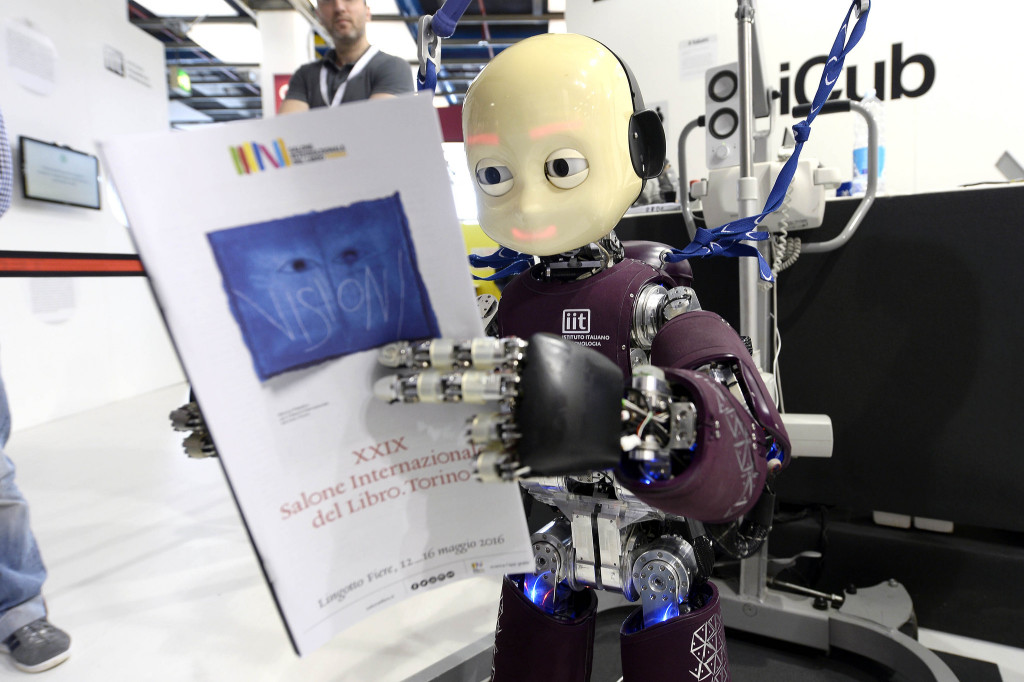 Besides Dahl celebration, there have been others with meetings and readings: the 70th anniversary of the Italian Republic, the 500 years since the Orlando Furioso first publishing, the 100 years since Guido Gozzano’s death and the birth of Natalia Ginzburg and the 500 years since Shakespeare and Cervantes’ death – who died on one day distance in April 1616.

OFFICINA – Editoria di progetto has been confirmed for the third time (an event dedicated to independent publishers in favor of the reading promotion), while this year among the hosted excellent names there have been Sharin Ebadi (first Muslim woman to get the Nobel Prize for Peace), Marylinne Robinson (who’s received the International Mondello Prize from Michela Murgia), Michael Cunningham, Jeffrey Deaver, Clara Sànchez, together with many Italian names that have contributed to overcrowd the rooms during presentations and meetings.

In the end we have to mention a long term initiative to launch a huge “digital encyclopedia” that tries to put together the Archivi del Salone del Libro, the Teche Rai and the Istituto Luce to make a digital platform never seen before, the “big Treccani of the future”, available for new generations.
More visionary than this…