Two hours e 47 minutes stretched in 6 chapters (yes, in a Kill Bill style) to tell about eight criminals and two coaches stuck in a lodging-house immersed in the snow. 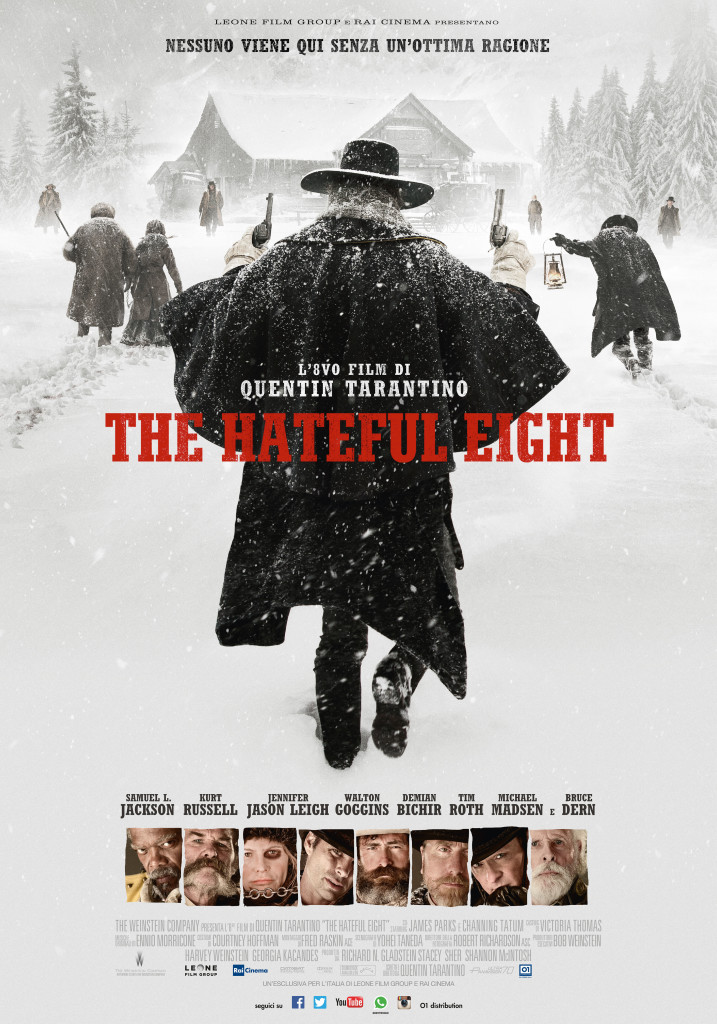 Chapter One: Last Stage to Red Rock. For half an hour we could think that the three main characters will keep talking forever inside and outside the coach (S.L. Jackson seems to be the updated version of Django Unchained’s Stephen), while hitting the prisoner and feeling admiration for Lincoln’s letter. But the storm looms over.

Chapter Two: Son of a Gun. There’s still enough space in the coach, so the three pick up the new Red Rock sheriff – half buried in the snow – without whom the bounty hunters won’t get their reward for the prisoners.

Chapter Three: Minnie’s Haberdashery. It’s the lodging-house where they decide to wait until the end of the storm; here we found the other four faces of this whitened Western – with a T. Roth who gains the top as usual and a quote from Profondo rosso in the musical score.

Chapter Four: Domergue’s Got a Secret. The chapter opens with a close up of a poisoned coffee pot (yes, it brings to the memory Hitchcock’s milk glass) and goes on with a plot which mixes Luis Buñuel’s The Exterminating Angel with Agatha Christie’s Ten Little Indians (here we also find the little black- Warren).

Chapter Five: The Four Passengers. A narrative flashforward was required and so it comes to reveal Domergue’s secret.

Last Chapter: Black Man, White Hell. Do you remember the end of Django? Well, put all that blood in a lodge on a vast land of snow and lock the door. Twice. A last note: the acting is great, especially in the linguistic performance with the excessive use of accents (above all, the one of the Mexican Bachir, known for Oliver Stone’s Savages and main character of the series The Bridges).