Caravaggio hasn’t been just a great painter; he has been the precursor of the theatrical and cinematographic representation, through his peculiar use of the oblique lightning, experimented in his atelier putting lanterns to leave in the darkness the zones he didn’t mean to show. So Caravaggio Experience cannot just be considered an exhibition: it’s a full immersion that completely captivates the spectator/visitor into the 57 light painter’s masterpieces, by an immersive technology. Artworks are reproduced in a 50 minutes video displayed through a liquid crystal panels system (LCOS) with an advanced projection system (INFINITY DIMENSION®) by 33 Canon XEED HD projectors, with the original soundtrack composed ad hoc by Stefano Saletti and the olfactory perceptions chosen by master perfumers from dell’Officina Profumo – Farmaceutica di Santa Maria Novella.

Saletti has composed an original soundtrack because Caravaggio’s light owns a sound. And it’s a light so huge that can tell a life and be completely absent, staying in the shadow. The composer chose harsh and acid sounds and worked on two different levels: he emphasizes the dramatic side with string instruments, percussions, distortions and then he rarefies musical spaces through sound reverberations. This kind of musical dichotomy represents Caravaggio’s set dichotomy where you can find life and death, good and evil, and music serves this sort of confusion, being tough and rough-edged at first and then coming back to give voice to light and colors, reassuring for a moment and questioning everything again a moment later. 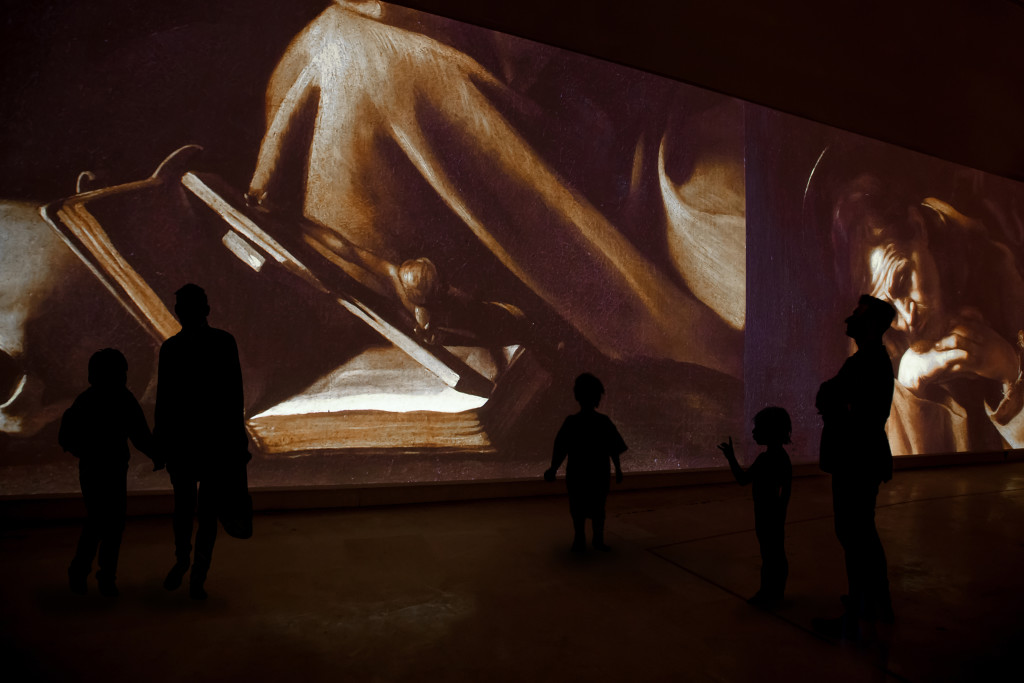 A huge exhibition like Caravaggio Experience needed a director, Stefano Fomasi, who worked together with the video artists of The Fake Factory – I want to point out the direction idea: creating a gallery of Caravaggio’s artworks through a project of immersive art (we can define it immersive because it uses digital technologies, music, sounds, video projections and perfumes – not using 3D technologies because it was at the base of the initial project but then it didn’t properly fit the museum fruition in this case – to really get the spectators involved, to bring them inside the space created by the artist, not only ideally but physically) is an idea developed from the three-dimensional attitude of his art itself. The use of light defining bodies and composing the set brings him straightly closer to the director and the set-designer figures, making him a creator of tales, as cinema does. So Fomasi divided his tale in different chapters:

The Light: in The Calling of Saint Matthew the space can be perceived through an emotive attitude because the divine light – coming behind Christo and enlightening all the observers – can be perceived only by Matthew, who points at himself because he has been called/lighten up.

Naturalism: we find here artworks like Saint John the Baptist, Bacchus, The Lute Player, The Musicians, Amor Vincit Omnia, characters of everyday life that he met in Rome walking on the streets, in palaces and workshops.

Theatricality: in this section are presented the structural and compositional elements of Caravaggio’s artworks, without light and colors, to reach their essence thanks to the positions and the balance of bodies, through the light, the geometrical forms, the three-dimensional deep, by a digital composition and decomposition of lines and details. A special mention for his Medusa: the dramatic act of Perseus cutting Medusa’s head is transformed into a splatter sequence where snakes become alive – as they were real hair moved by a blast of wind – and the blood swells covering the whole screen, transforming the pitch dark in deep red.

Violence: it’s an essential part of Caravaggio’s life. The murder committed during a scuffle, the resulting sentence of death and the escape to avoid the execution. It’s a violence where he was character and spectator in Roman alleys and taverns, that surely influenced his creative production.

The exhibition ends following a chronological path through the life and art of Caravaggio with a virtual gallery that shows the totality of his work. 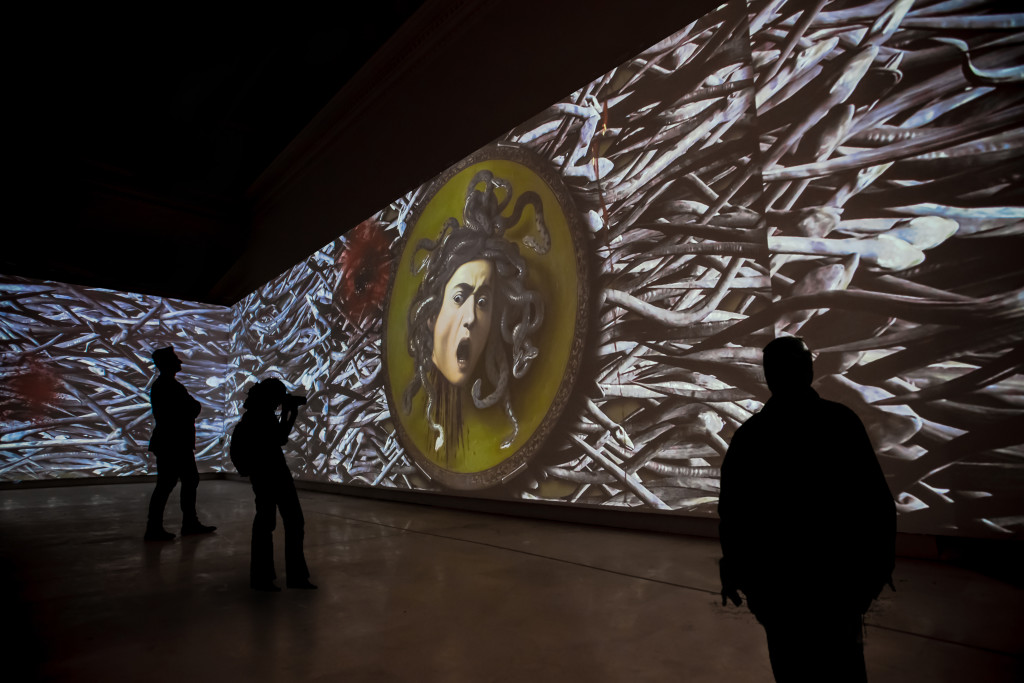