by the editorial team

in this occasion the local Administration and MAP Museo Agro Pontino cooperated to realize a number of events scheduled through a year, with the right intention to go beyond the simple celebration of a town founding, offering to the people cultural paths next to new services and public works which could enrich the urban context in a permanent way.
There’s been, therefore, a unanimous organization strongly wanted by the Major Eligio Tombolillo and the Culture Assessor Patrizia Sperlonga, coordinated by the scientific team of MAP Museo Agro Pontino, with the direct participation of Urban and public Works Department; the intent was to put the facilities in synergy so to give back the town historical memory and, at the same time, propose the increase of a contemporary town identity.
Through the cultural poles already well stated in Pontinia, as Teatro Fellini and MAP Museo Agro Pontino, the town hosted artists and events to recreate a contemporary history of the Agro Pontino.
On the 4th and 5th of November 2015, , was introduced ARTE e TERRITORIO – Riflessioni sul Terzo Paradiso con Michelangelo Pistoletto (curated by Stefania Crobe, Lorenza Lorenzon, Francesco Saverio Teruzzi), at MAP of Pontinia and the ISSIS T. Rossi of Priverno: Maestro Pistoletto presented the art as bearer of civic consciousness and collective identity; on the 4th of November, Kennedy square hosted the urban dance performance ri/FLESSIONE curated by Laccio.
On the 6th of December the photography exhibition L’Equilibrio was presented, with the award of the photograph competition Festival Pontino degli Artisti di Strada, curated by the cultural Association Cantiere Creativo which, in the same day, also organized a new edition of Pontino’s Handcrafts Market.
On the 18th of December was inaugurated New arrivals, New stories, a site-specific installation made by Bianco-Valente, curated by Marianna Frattarelli, completion of the Artist’s Residence carried out last July by the artists couple.
On the 19th of December 2015 the city presented a series of events following the idea to give back places and spaces to the citizens as a gift. From the inauguration of Parco della Memoria and the monument dedicated to the city 80 years – made by the artist Franco Turco in cooperation with the architect Luigi Caponera – De Iulis marching band of Pontinia guided the city sport associations parade – among them the majorettes White Flower of Pontinia and Butterfly of Sezze – to the Ex Torre Idrica, wonderful example of rationalist architecture, which now can be used again as exhibition space and museum after an important restoration work and renewal. The same day, here, there was the opening of the exhibition Metamorfosi e Metafisiche, curated by Alessandro Cocchieri, Director of MAP Museo Agro Pontino: Roberto Nistri and Mattia Panunzio’s photograph projects tell the story of the town in its multicultural aspects, through images where social and work environment divides between urban space and rural context. The perfomance Contaminazioni Contemporanee of Modulo Centro Studio Danza introduced the photographic stories with a urban dance on the square in front of the Ex Torre Idrica.
Evocative the historical re-enactment with vintage cars and motorcycles at MAP, in cooperation with Modulo Centro Studio Danza, Motoclub Pontino, Vespa Club Pontinia and Bianchina Club.
The Teatro Fellini schedule was rich: on 27th November went on stage L’ultimo giorno di un condannato a morte, adapted play from Victor Hugo’s novel, written and directed by Danilo Proia with the support of Amnesty International; the 22nd of December the Scuola di Danza ASD Creale performed More than dance, Demo show. Among the concerts: Christmas concert (18th.12), curated by Arte e Teatro; 80 Voglia di Natale  (19th. 12), curated by Giovani Filarmonici Pontini and Corale Polifonica città di Pontinia; Una voce per gli amici del cielo, directed by the Maestro Roberta Cappuccilli; Epifany Concert, curated by Giovani Filarmonici Pontini. 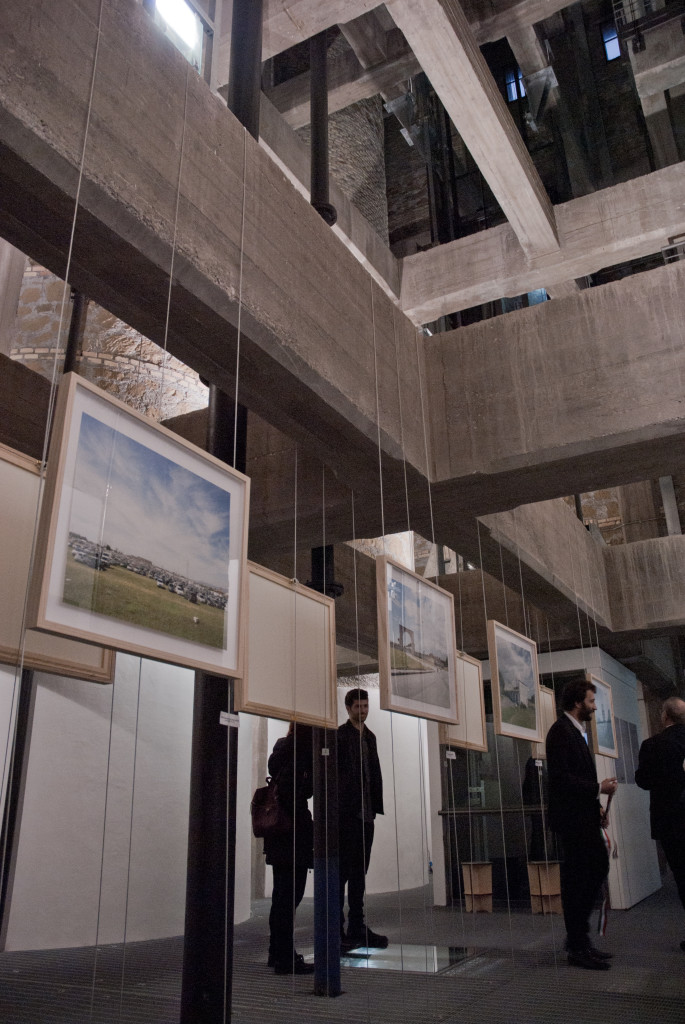 The Fellini Theater hosted also AGRALDICA, an interactive workshop – by Antonio Rossi in cooperation with MAP Museo Agro Pontino – where the students of Pontinia Scuole Medie Verga and Manfredini, lead by the academic Antonio Rossi, were invited to approach the founding towns emblem through the play.

The same morning took place 80 SCUOLA, a thematic contest about the history of Pontinia which gave the students the chance to experience video design and win grants for new educational material. The event is part of the educational path of education to image Immagina La Storia, in cooperation with Comune of Pontinia – Social Services Sector, Il Chinino Cultural Association and MAP Museo dell’Agro Pontino.

At the MAP Museo Agro Pontino, literature and essay writing have been protagonists of presentations and meetings with the authors: AGRALDICA, by Antonio Rossi; Quando la terra era promessa, Storie dell’agro Pontino e Romano, Testimonianze by Mario Tieghi and Gli Ipocriti, by Eleonora Mazzoni, in cooperation with Circolo Filò, which also curated the projection of the documentary Mattotti, by Renato Chiocca.